Wayne Peet Trio: What The? 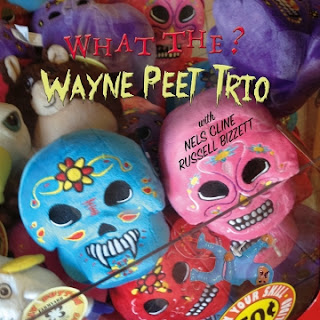 Keyboardist, occasional bandleader, and recording engineer par excellence Wayne Peet has long been a mainstay of the Southern California improvised music scene. He first recorded with guitarist Nels Cline back in 1980 as part of a large ensemble led by bassist Roberto Miranda, and they’ve worked together sporadically in the decades since. Peet, Cline, and drummer Russell Bizzett are the Wayne Peet Trio, captured live in Peets’s Los Angeles studio over two days in 2006 for the just-issued What The? on the pfMENTUM label. An earlier edition of the band, with guitarist G.E. Stinson joining the fun, recorded Live At Al’s Bar in 1999, also for pfMENTUM. Here the trio stretches out at length on four of Peet’s tunes, Cline’s supercharged Chase to the Cut, and four group improvisations. Peet is heard mostly on organ, with little touches of clavinet and theremin. For the most part, the music just sort of flows along as riffs come and go. The focus drifts between Cline and Peet with no one voice dominant for very long. The music is often pretty laid-back, though they do build up a head of steam in parts of Capable Faith and again towards the end of the fifteen-minute extravaganza Improv 3 - Special Feeling, as Cline’s effects-laden guitar threatens to break things wide open. There’s also a deliciously rambunctious passage in the middle of Improv 2 - Above & Beyond the Bend. While organ groups tend to aim for danceability and a soulful, blues feeling, that vibe is mostly absent here in favor of an atmospheric approach to sound and the free exchange of musical ideas. Mostly, but not altogether, as the trio slams through the concluding title track on waves of electric guitar, snaky organ, muscular pedal bass, and Bizzett’s fierce beats. Peet’s musical world embraces the happy accidents of improvisation and the surprises that result from allowing the music to go in any direction. What The? is a kick, with thanks to Peet and pfMENTUM for rescuing this set from the archives.
pfMENTUM PFMCD127; Wayne Peet (Hammond B3 organ, clav, theremin, FX) Nels Cline (g, FX) Russell Bizzett (d); Los Angeles, CA, June 6-7, 2006; Capable Faith/ Devout Vulgarity/ Improv 1 - Immoral Dilemma/ Improv 3 - Special Feeling/ Chase to the Cut/ Hushbubba/ Improv 2 - Above & Beyond the Bend/ Improv 4 - Momently/ What the?; 75:49. pfmentum.com
Posted by Mr. Stu at 3:24 PM

Email ThisBlogThis!Share to TwitterShare to FacebookShare to Pinterest
Labels: pfMENTUM, Wayne Peet Trio, What The?