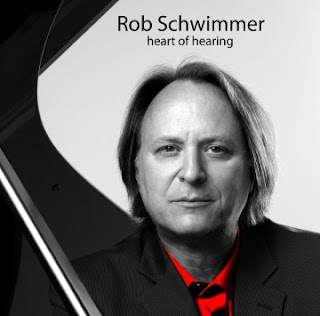 Rob Schwimmer’s main instrument is the piano, but on his richly varied and compelling solo album, Heart Of Hearing, he’s also heard on theremin and the Haken Continuum, a music performance controller and synthesizer. From his self-taught beginnings (starting at the age of 3!), Schwimmer has amassed a broad résumé that includes touring with Simon and Garfunkel between 2003 and 2010, recording with Annette Peacock in the Seventies and James Emery (of the String Trio of New York) in the Nineties, and accompanying silent films at New York’s Museum of Modern Art. His repertoire here is as varied as his background, encompassing popular songs (a radiant In the Wee Small Hours of the Morning), Kurt Weill’s Lost in the Stars (where the theremin takes a cameo with the melody), Simon’s The Sound of Silence (disguised a bit and quite lovely), a couple of Bernard Herrmann’s themes from Vertigo, and a batch of original tunes. There’s also a soothing prelude by Nikolai Obukhov written in the early twentieth century and played on piano with an overdub from the Haken Continuum, sounding like a cross between pedal steel guitar and a theremin, a version of Stephen Foster’s Hard Times, and what Schwimmer describes as a Concert Paraphrase on Adam Guettel’s Octet from Guettal's 2003 musical The Light in the Piazza. After so many surprises, Schwimmer has one more ace in the hole, playing the finale, his own Accepting It, in a trio format with bassist Jay Anderson and drummer Jeff Hirschfield. I’m happily reminded of Thelonious Monk’s Thelonious Himself, another solo piano album with added musicians (John Coltrane and Wilbur Ware) on the last track. While it’s evident from pieces like the impressionistic Waking Up in a Strange Place and the wildly ornate cChHoOpPilnN, which messes with Chopin’s Opus 35 #4, that Schwimmer has a prodigious keyboard technique, I’m happy to note that in this recital, technique is merely the means by which he creates music that touches the emotions. Note that album title again: Heart Of Hearing. It’s a fine bit of wordplay, and very telling. The appreciative liner notes by fellow pianist and astute listener Ethan Iverson act as a helpful guide to Schwimmer and his music, but all you really need is an open mind, open ears, and a receptive heart. Heart Of Hearing is strongly recommended.
Sunken Heights SHM 2018; Rob Schwimmer (p; plus theremin on *; plus Haken Continuum on #) Jay Anderson (b on @) Jeff Hirschfield (d on @); Brooklyn, NY, & Mt. Vernon, NY, no dates indicated except @, 1989; Here We Are...; Sparks; In the Wee Small Hours of the Morning; Waking Up in a Strange Place; Mist/The Seduction; cChHoOpPilnN; Lost in the Stars*; The Sounds of Silence; Obukhov Prelude #1#; A Feather Blown By the Wind; The Question; In a Japanese Garden; Prelude & Scene d’Amour from Vertigo; Concert Paraphrase on Adam Guetttal’s Octet; Hard Times; Introduction & A Home Away from Home; Accepting It@; 51:08. robschwimmer.com