Kjetil Muletid Trio: Not Nearly Enough To Buy A House 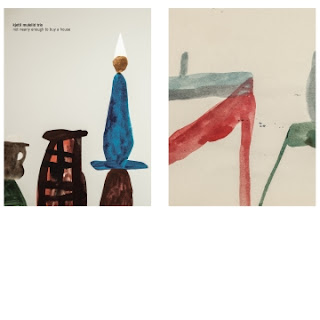 It’s always a distinct pleasure to have some relaxing music to turn to, and given the muddled state of the world and its political acrimony, the need is greater than ever. The piano trio is a classic lineup and in a crowded niche of ensembles, the Kjetil Muletid Trio is impressive for its calmly meditative approach to music-making. Except for the brief group improvisation titled C & R, all the songs on Not Nearly Enough To Buy A House were composed by pianist Muletid. The instantly attractive lyricism of his compositions and the warmly sympathetic playing by bassist Bjørn Marius Hegge and drummer Andreas Skår Winther contribute equally to the success of their music. Muletid has a firm touch at the piano, crisp and definitive even when he occasionally lets loose with a barrage of notes. The pretty Fly Fly is a good example. Clearly, he has technique to burn, but he never lets it overshadow the music. The trio’s deft interplay comes to the fore on Children’s Song, another thoughtful melody and performance with especially fine playing by drummer Winther. The hesitant You Stood There in Silence, Having No Words is a standout, revealing depths of feeling in simple melody and the poised and modestly swinging arrangement. If there’s one problem with Not Nearly Enough To Buy A House, it’s the predominance of moderate tempos. The spirited Leaving Home, with a theme that seems part Keith Jarrett and part Abdullah Ibrahim, is a welcome change of pace, and a bit more vitality might have made this very enjoyable release even better. Recommended.
Rune Grammofon RCD 2196; Kjetil Muletid (p) Bjørn Marius Hegge (b) Andreas Skår Winther (d); Trondheim, Norway, January 11 & 13, 2017; Entrance/ Fly Fly/ Children’s Song/ You Stood There in Silence, Having No Words/ C & R/ From Someone Else’s Point of View/ Time/Breath/ Leaving Home/ Three Last Words; 41:10. www.runegrammofon.com
Posted by Mr. Stu at 6:13 PM