Denny Zeitlin: Wishing On The Moon 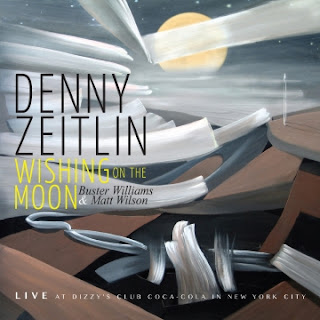 Pianist Denny Zeitlin made his recording debut way back in 1963 on a Jeremy Steig album. The following year found him helming a trio with Cecil McBee and Freddie Waits for his first Columbia date. Wishing On The Moon is his latest trio project, documenting a 2009 gig in New York with long-time associates Buster Williams on bass and Matt Wilson on drums. Zeitlin notes that he’s recorded all these tunes before, but jazz fans know that in the hands of master improvisers, a song will never sound the same way twice. The disc kicks off with an extended investigation of Cole Porter’s All of You. It’s one of Zeitlin’s all-time favorite standards, and this performance features a solo by Williams and a section of trading off between Zeitlin and drummer Wilson. The title track is up next in a warm-hearted performance that gracefully lopes along. In his simpatico accompaniment and brief solo, Williams shows why he’s considered one of the masters of the bass. Jule Styne’s As Long As There’s Music is especially fine, featuring an animated Matt Wilson and some energetic piano by Zeitlin. The Slickrock suite was first heard on the 2003 MaxJazz release of the same name with this trio. Zeitlin’s four linked compositions successfully “evoke the feeling of an adventurous day” spent mountain biking in Moab, Utah. Dawn; Gathering is out-of-tempo, a preparatory gathering of forces. Part two is On the Trail, an exhilarating and a quickly moving romp that comes to an unexpected stop, as if some rocks got in the way and forced a quick halt. That leads right into the restful Recovery, before the pace picks up again with On the Trail Again, once again featuring a fired-up Matt Wilson. The delicately tender approach to the traditional Put Your Little Foot Right Out shows the trio at its best. The perfect tempo, the dynamic interplay of the slowly shifting instrumental roles, Williams’ caressing solo supported by Zeitlin’s gentle chording, and the overall shape of the performance make this one of the gems of this set. The forthright melody of Zeitlin’s There and Back shifts back and forth, in the composer’s words, from “walking jazz time to funk,” which makes for a vigorous performance of unexpected twists and turns. Williams takes another provocative solo to lead into Signs & Wonders, a burning uptempo piece composed by bassist David Friesen. It certainly revs up the trio as they bring the set to an exciting conclusion. The audience at Dizzy’s Club Coca Cola surely went home wanting more, and we’re fortunate indeed to have this recording and the ability to hear it over and over. Warmly recommended.
Sunnyside SSC 1514; Denny Zeitlin (p) Buster Williams (b) Matt Wilson (d); NYC, March 10, 2009; All of You/ Wishing on the Moon/ As Long as There’s Music/ Slickrock (Dawn; Gathering/ On the Trail/ Recovery/ On the Trail Again)/ Put Your Little Foot Right Out/ There and Back/ Bass Prelude to Signs and Wonders/Signs and Wonders; 65:22. www.sunnysiderecords.com